Now that we are a couple of weeks into our go-live, I feel like I can take a moment to catch my breath and put my thoughts on paper about our implementation experience. Epiphany was tasked with implementing Cardio Server in a very short time frame. We communicated our aggressive time-line requirements; the Epiphany team heard our needs and was able to implement Cardio Server to meet them. 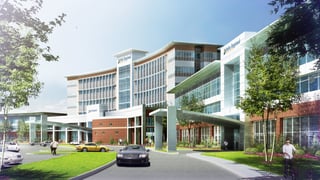 The team you assembled for this project was the best I have ever worked with. Bob Sturgill was instrumental in keeping the Epiphany team, as well as the DRMC team, on task to meet this deadline. Bob went above and beyond by scheduling time with just he and I to ensure certain milestones were met on time. Bob leaned on his contacts from Mortara to aid in integrating the stress and Holter systems with Cardio Server. Victor Villafaña worked tirelessly with our interface architect to ensure stable HL7 integration with Meditech. Victor also accommodated several changes just prior to go-live and a few optimizations after go-live. The trainer was exceptional as well. Tammy was well prepared to ensure we did not skip a beat while transitioning from Cerner Powerchart ECG to Cardio Server. During a very stressful time for our organization, Tammy kept both the ECG techs and physicians calm and focused while learning the new system.

The professionalism and work ethic of all involved from Epiphany should be commended. I never once felt that we were just another number on a sales sheet.

Your staff made the DRMC team feel as though we were part of a bigger team. The entire team was focused on effectively implementing a system that would aid in how we care for our patients as an organization. The Epiphany staff seemed as vested in this endeavor as we were. I have been involved in several other implementations that did not go so well. Other vendors we have worked with put their best people in sales. After the sale, the customer experience was terrible. From conversations with other colleagues, this seems to be the norm these days. Epiphany deserves to be applauded on this project. From sales to post-live support, it has been a wonderful experience. I feel sure there are a few people that I failed to mention but I appreciate their work on this project too.

It is not often that the customer is treated as well as we were by Epiphany and you deserve to be praised for it. We are very satisfied with the quality of the system and how smoothly the system was implemented.

Thank you and your entire team at Epiphany for the hard work and dedication during this project.

Founded in 1953 and based in Greenville, Mississippi, Delta Regional Medical Center is a 325-bed facility that is recognized as the leader in the delivery of quality care in the area. Delta Regional Medical Center’s purpose is to provide high quality medical services to the citizens and communities in the Tri-state Delta Region at the lowest practical cost and be a leader in providing needed support services to healthcare providers and patients to improve the health of the communities they serve.

I directly managed over twenty full pulmonary function laboratories at Cleveland Clinic’s main campus and outpatient clinics. In addition, we had eight hospital-based pulmonary function laboratories within our system. While the laboratories I managed were able to generate a preliminary report electronically within minutes of
test completion, the interpretation process was paper-based because we could not find software that would manage the process efficiently. 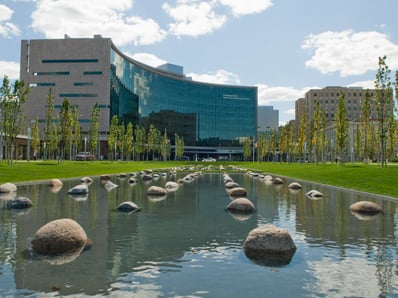 The laboratories at the eight regional hospitals had a workflow that ended in a paper report and an inefficient interpretation process. This process resulted in the final, signed paper report being scanned into the electronic medical record, sometimes with deferred turnaround times.

When we saw the Epiphany PFT product it appeared that it represented a means to incorporate a standardized process that would result in consistent test results across the health system. We began a workflow analysis and, with the help of the Respiratory Therapy Managers and Pulmonary Function Technologists at the main campus and each regional hospital, we embarked on a process that standardized the pulmonary function order lists, appointment names, procedures, reports and interpretation of test results. When this was completed, we had consistency in the pulmonary function testing process across the health system.

Epiphany provided the tool that allowed interpreting physicians to have easy access to the tests (access from any workstation within the health system) and an efficient means of applying a standardized interpretation and electronic signature, completely eliminating the paper process. We were successful in meeting our goal of a 24 hour turnaround time for getting interpreted tests into the patient’s electronic medical record. 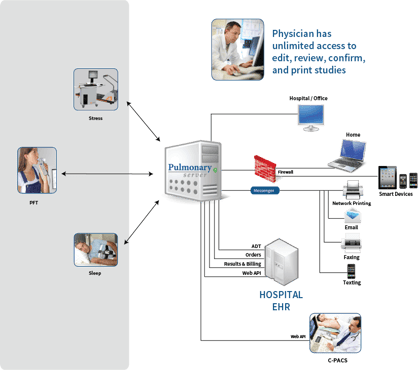 Kevin looked at the test interpretation software of all of the PFT hardware manufacturers in use across the health system and considered implementing a hardware change throughout their entire system.  When he learned that Epiphany had adapted its software from Cardiology to PFT, Kevin decided to see exactly what Epiphany’s Pulmonary Server had to offer. Kevin concluded:

The bottom line is this: I saw that it was not necessary to standardize the hardware of the testing devices as all of the devices could generate a PDF report electronically and this is presented to the interpreting doctors. I thought, “Yes, this is really what I envisioned. Physicians had rapid and easy access to Epiphany from any workstation in the system, the PDF reports took only a few seconds to present to the physician, and the user-interface was simple to learn and use.”

After Implementation of Epiphany Software:

Cleveland Clinic now has four different PFT vendors integrated with Epiphany and the EMR, so they are no longer tied to any specific vendor. This flexibility gives them the freedom to select a vendor for future purchases or replacements that best meets the needs of the intended laboratory site.

Reflecting on the improvements that Epiphany brought to Cleveland Clinic, Kevin stated:

Pulmonary Server helped us standardize practices across the health system. Epiphany was able to tailor the software to meet the specific needs of our hospitals.

This year’s award marks the seventh sequential year that Epiphany’s Cardio Server has been named number one by KLAS. The KLAS report recognizes the software and service organizations that excel in helping providers deliver better patient care.

“Hearing that we are the KLAS Category Leader for the seventh year is an exciting moment for the Epiphany teams,” states Kelli Sudduth, VP of Professional Services at Epiphany. “Customer service is one of our most important goals as a company; this award reinforces how we continue to progress each year. We work every day to ensure the highest level of service to each customer. Whether a client is a community hospital or in a large IDN market, each one is important to us and managed as such. This recognition is a true representation of the company’s commitment to our customers.”

Steve Fetrow, VP of Engineering at Epiphany had this to say when he heard the news: “Seven years as a KLAS Category Leader is an incredible honor. But we really have to thank our customers for being the inspiration for all that we have accomplished. Since founding the company twelve years ago, we have listened carefully to customers as they described problems handling test results. Those pain points became product ideas for 15 different diagnostic tests and vendors. Today we are being honored for ECG Management, but there is so much more.”

Epiphany Healthcare simplifies diverse clinical workflow using one consolidated EHR interface. Since Epiphany's Cardio Server is an ideal solution for integrated delivery networks, the number of installations has nearly tripled since Epiphany received their first KLAS award in 2009. Now with over 700 hospital customers in the US and abroad, Epiphany is committed to serving its customers’ needs through product innovation, the delivery of exceptional service, and an unwavering dedication to interoperability. Discover why Epiphany is the preferred provider when managing multi-vendor, multi-modality diagnostic test data.

KLAS is a research and insights firm on a global mission to improve healthcare delivery by amplifying the provider's voice.  Working with thousands of healthcare professionals and clinicians, KLAS gathers data and insights on software, services, and medical equipment to deliver timely reports, trends and statistical overviews. The research directly represents the provider voice and acts as a catalyst for improving vendor performance. Follow KLAS on Twitter at www.twitter.com/KLASresearch.

Electrocardiograms are one of the most prolific examinations in a hospital. They may not be complicated to perform but the sheer number of them make ECGs a challenge to manage, particularly in hospitals working with paper-based ECGs.

We hear repetitive grievances from managers of paper-based departments. They typically state problems that relate to lost revenues from the ECGs as well as other study types. Problems include:

Epiphany has solved these problems for dozens of formerly paper-based hospitals. Here is how it works: 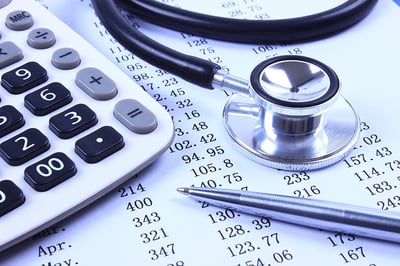 Additionally, we customize the billing workflow to your requirements. For instance, some of our customers want to separate technical from professional charges. We accomplish this by flexible triggers. In the separation instance, we trigger the technical charge once an order is linked to a study and promoted to the unconfirmed queue. The study is then read by the physician and confirmed. The physician’s confirmation triggers a second charge, the professional charge. (To learn more about Epiphany’s HL7 integration for automated billing, see our blog: “HL7 Integration Developments – Technical Charges, Professional Charges, and Credits.”)

On top of all the billing problems we solve, our formerly paper-based customers save money in the labor required to manually process ECGs. Many of them save enough money in the first year to pay for the entire system and enjoy the benefits of reduced labor costs forever. This also applies to other modality types, e.g., Holter, stress, PFT, and more. (See our blog: “Inefficient Paper Process Weighing You Down? Let us Analyze Your Workflow!”)

If you would like to improve efficiency and save money at your hospital or hospital system, contact Epiphany Healthcare today for a demonstration and see what Cardio Server can do for you!

In the last couple of weeks I have had the chance to speak with cardiology department managers in three different hospitals. All three accounts are in the process of replacing their legacy ECG Management Systems with Epiphany. As you read the anecdotes below, please remember that Epiphany’s support agreement is 24/7/365 and includes lifetime software upgrades. Also, Epiphany has been rated as best in KLAS for the last four years in customer support; MDBuyline has rated us a best customer support in ECG Management in 2012.

The first hospital was a medium sized community medical center with a total of 12 cardiographs. Their support agreement was expiring and they wanted to be sure that we would have our system up and running before the expiration date. I asked them what the renewal cost would have been from their legacy vendor. The answer shocked me, "$252,000 for a 5-year contract”. This hospital’s contract from Epiphany is $47,880 for the 5-year support agreement.

I was on a conference call with a second hospital finishing up the terms and conditions on a contract to replace their legacy ECG Management system. They are a small rural hospital with only 6 cardiographs. We were discussing our support charges and I asked what they were paying for their current contract? Their answer was more disturbing than the one above. “We can’t afford their contract and are on the pay as you go program”. How much was the contract for a small rural hospital with 6 carts? $232,000 for 5 years! This hospital is on Epiphany’s support agreement at a total 5 year charge of $27,360.

As healthcare tightens its collective belt you may be looking for savings. If any of the legacy support system cost examples seem familiar; I encourage you to ask us how you may be able reduce your ECG Management system lifecycle costs.